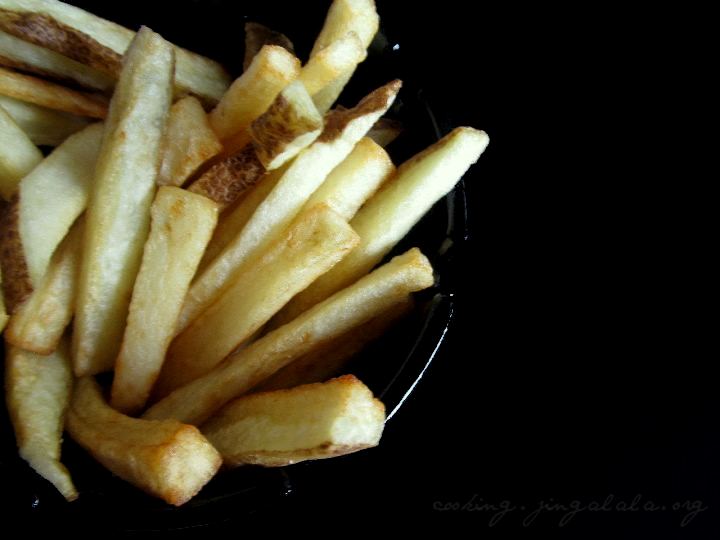 Do you agree with me that people who never learnt to cook or who showed no interest in cooking or those who do not know where the kitchen is in their house, turn out to be the best home makers and cooks? :lol: Yeah. This is 100 percent true as far as I noticed. Proof is my lovely aunt and my pretty sister. And when you taste for the first time the dish made by them, it will really taste so so great!

This beautiful recipe is one which I observed my aunt prepare when she was engaged to my uncle. Aunts are really special and if they happen to be the youngest of the family, then they’re the heroines of the house. My aunt is such a special one in our house since she is the youngest in my Father’s family. [btw, my aunt looks exactly like actress Heera :) or even more attractive than her. Uggh, aunt hates me if she comes to read this statement]. With what I remember faintly, being the darling of the house, she never cared to learn cooking. And once she got engaged she took little steps to learn how to make special snacks. I think she chose to start from snacks to surprise my uncle after her marriage :P My memory remembers two snacks which she tried: One was achchu muruku (recipe once I’m to India since I don’t have the mould here) and the other was French fries. I will show you today how to make French fries/Finger Chips.

Back in India those days we never used to get variety of potatoes. We get only the Indian variety – the small once which will have lot of starch. This was how she made French fries. She cut the potatoes into little finger-shaped pieces and washed thoroughly in water and soaked them in water for an hour. Then she wiped out the water from EACH of the pieces using a kitchen cloth. I wondered, “Why is aunt making things so complex? Mom never made such recipes, or never complicated anything while making them”. I was doubting, what’s the use in wiping out the water from EACH potato finger separately in order to make them dry. Then she made them sit dry at least an hour before frying them. Then she fried and tasted them and asked me to taste. “Krunch.. Krunchch… Krunchchch….” Wow excellent it was! When people ask for feedback, I act dumb since I don’t get the right words quickly. So I said, “Ok Athai”. But I tell you today, it was not just an “OK” French fry. It was and IT IS THE HYPER-SUPER, ULTRA-CRUNCHY FRENCH FRIES!

So I decided to make those Finger Chips few months back. Oops..floppp! Utter flop! They weren’t that crunchy at all ;(

Step 1. Wash the potatoes. You can peel off the skin if you want. I prefer to have them with skin since it will give a fine look to the French fries. Cut the potatoes into long and little thick julienne. If you have a potato slicer at home use them, else take care to slice them into equal sized so that they’ll fry evenly. Put them in large amount of water as and when you cut the potatoes. 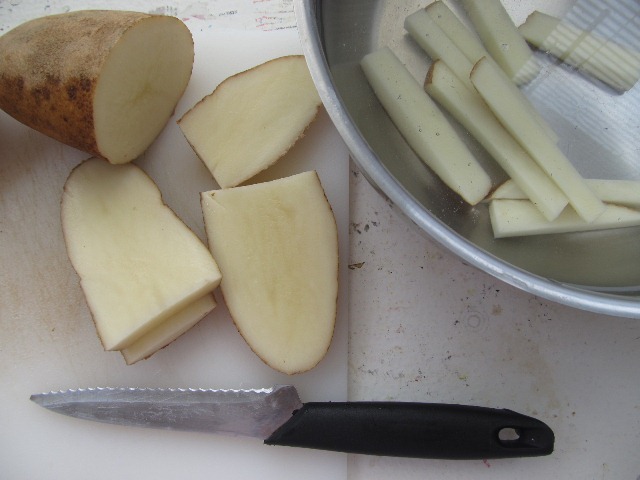 Step 2. Soak the potato slices for at least an hour or more, frequently changing the water (I changed water every 20 minutes). Can you see in the picture below how much starch is in the first round of water? 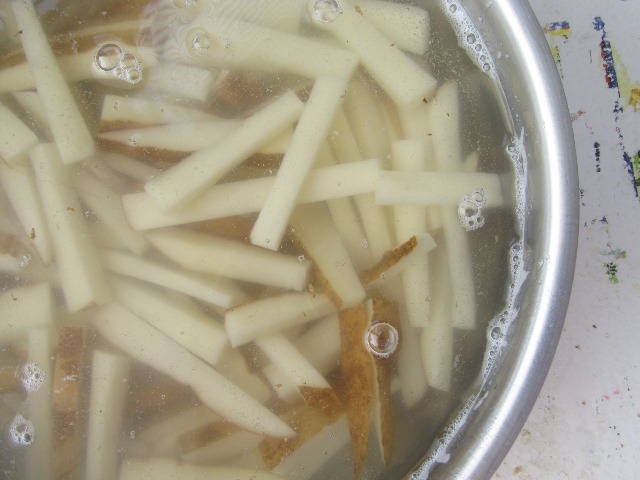 Step 3. When you discard the water every few minutes, mix up the potatoes from bottom up so that the starch that settled at the bottom is discharged too. 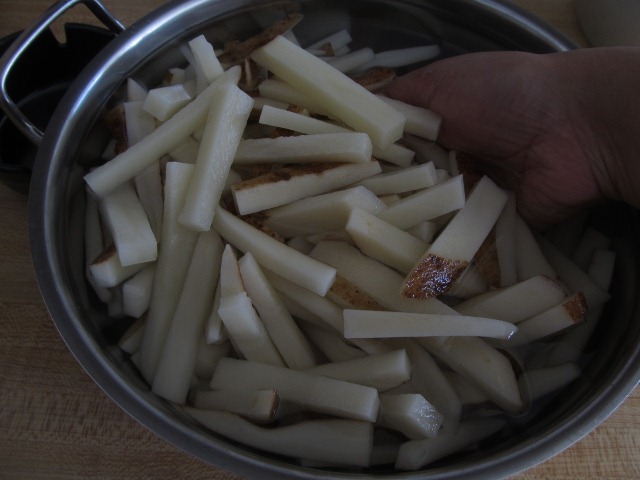 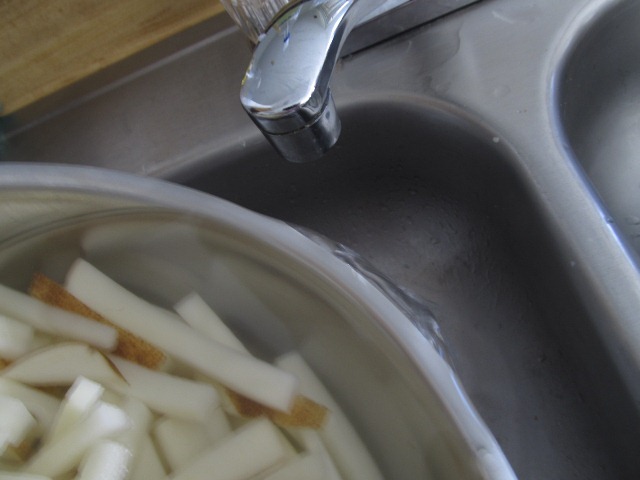 When you change the water every few minutes in that 1 hour soaking, the last sitting will be very clear which is free of visible starch. 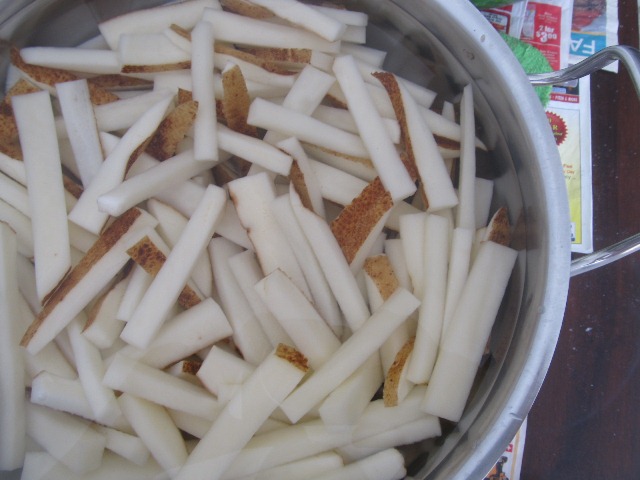 Step 4. After the mentioned soaking hours, discard the water. Take out the potatoes and let them sit on the kitchen towel for few minutes (about half-an hour). This way we make the extra water get absorbed by the kitchen paper/towel. 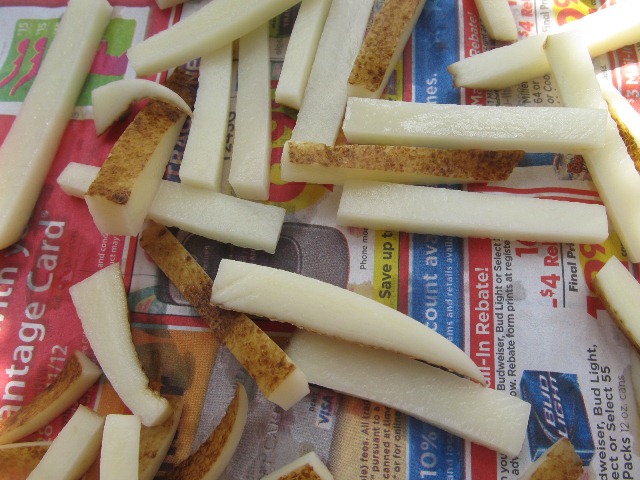 Step 5. Take another dry kitchen towel or kitchen paper and wipe each potato piece to dry them well. Leave the wiped potato pieces for few more minutes so that they are really dry. I normally collect uniform pieces and gather them into sets. If you are a neat cutter who can slice the potatoes uniformly into fine pieces then awesome. But I’m kind of amateur in perfect cutting. So I sort them according to size and height so that each set gets fried uniformly. 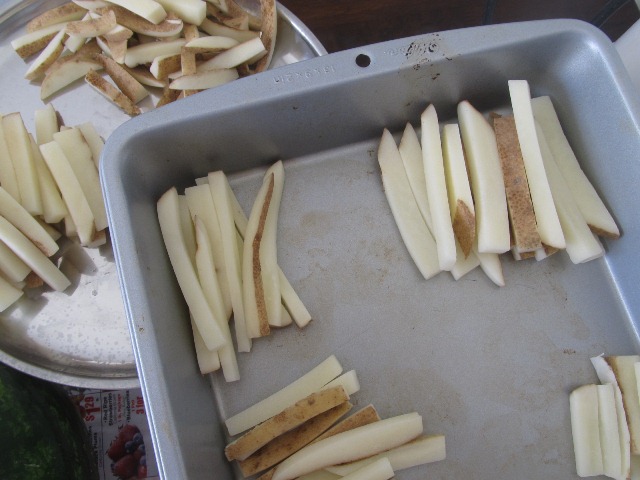 Low Temperature cooking of the potatoes:

Step 6. Now take a wide-mouthed kadai/deep-frying pan and heat oil in it. We are going to fry the potatoes twice. Once in the oil heated to a lower temperature and next in oil heated to a higher temperature. Don’t ever be careless making the oil to smoke. Keep flame in medium or medium-low. 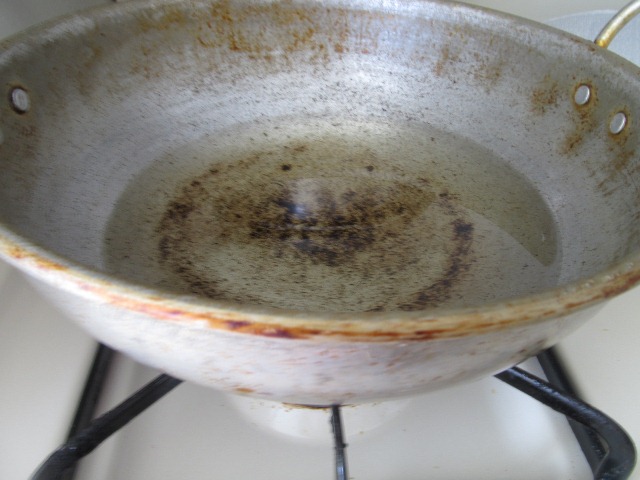 Step 7. Once the oil is heated, deep fry the potato pieces. Fry them in small sets. I had around 15+ pieces in one set into my deep-frying pan at a time. Remember, we are only trying to cook the potato and not trying to make them crunchy or crispy during this stage. Use a slotted ladle to turn the potatoes in the oil from time to time. This first round of cooking process will take around 5 minutes for each set. 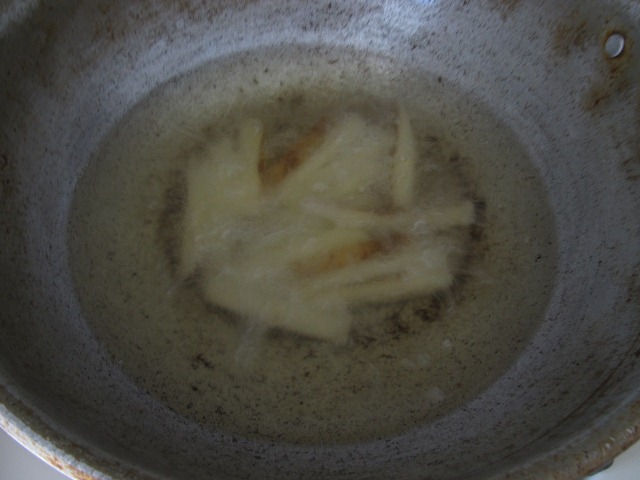 Step 8. Now, how can we find that the potatoes are cooked? I have 4 rules: Smell, Taste, Behavior and Color.

Take out a potato from the set and smell it [here, people with sharp nose take care, don’t bring it so close to your nose tip else you’ll end up having a red nose tip]. It should have lost it’s raw smell. It should have that cooked smell in it. Second rule, taste. They should really be soft. You should never feel the raw taste or find it hard to bite. 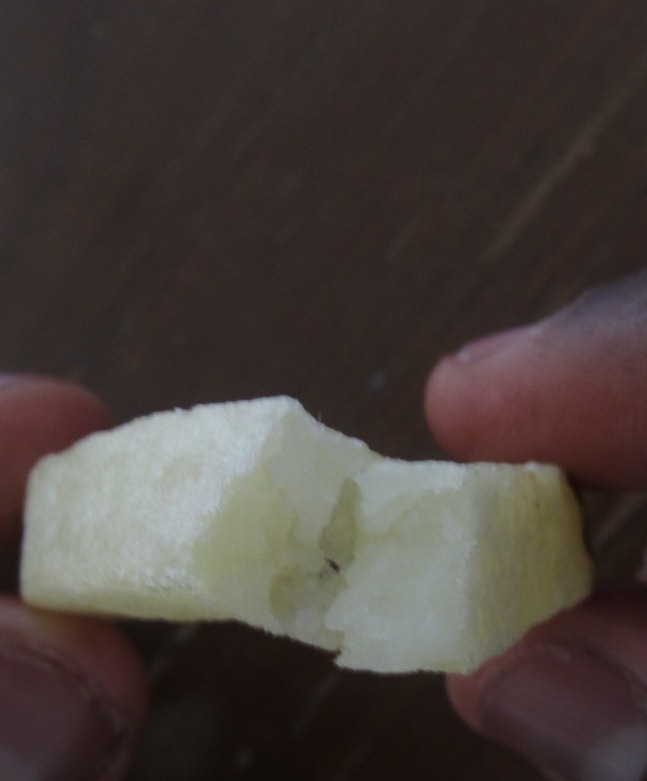 Another nice behavior is, when you first put the potato into the oil, they tend to be united inside the oil. As they get cooked, each slice float up and they tend to be separate from their group trying to go towards the outline of the oil circle in the frying pan. 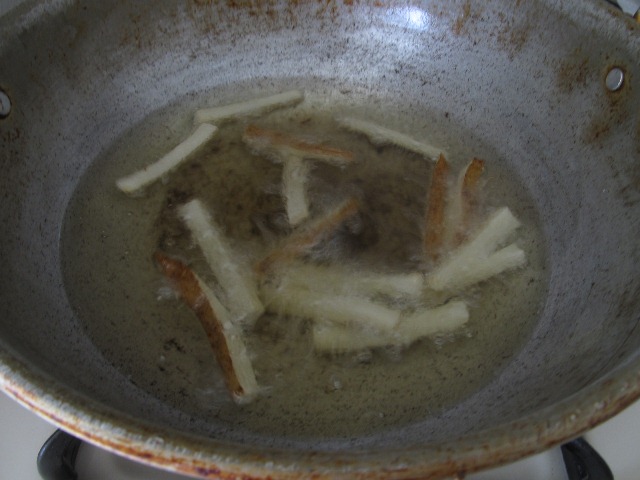 Fourth rule, Color. There wont be much difference in the color. But if you note closely, a very pale white coating will be above them. 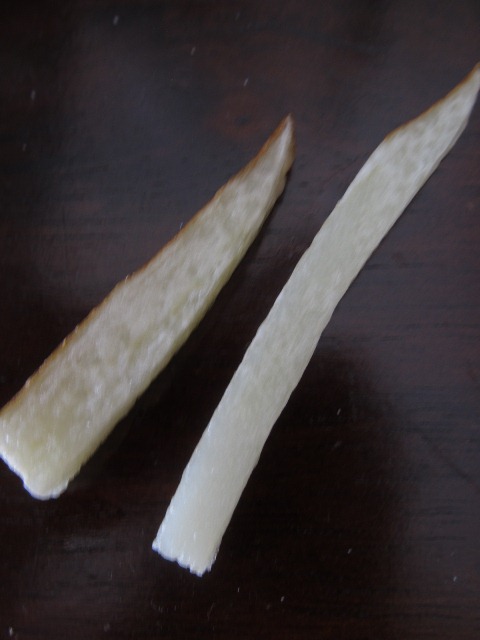 Step 9. Take them out from oil and keep it on kitchen tissue. Fry all the potato pieces this way in small sets and cool the potatoes really well. 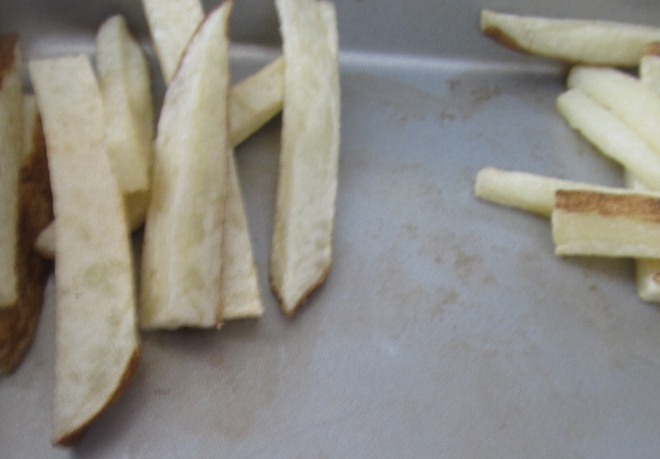 High Temperature cooking of the potatoes:

Step 10. Once they’re cooled completely, heat the oil again to a little high temperature and deep fry them well this time. We are going to make them crunchy and crispy this time. Use a slotted ladle to turn the potatoes in the oil from time to time. 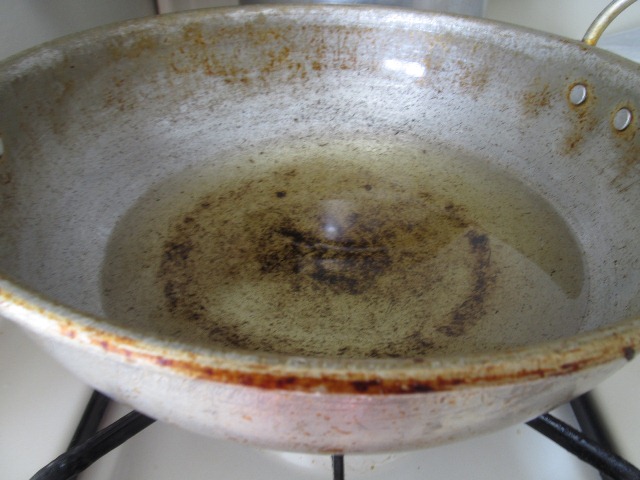 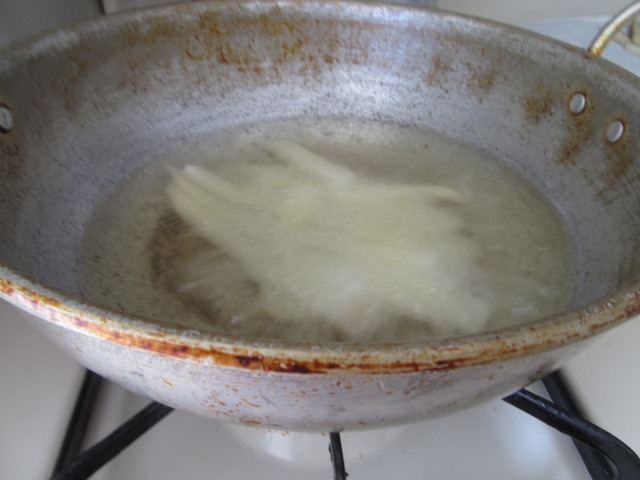 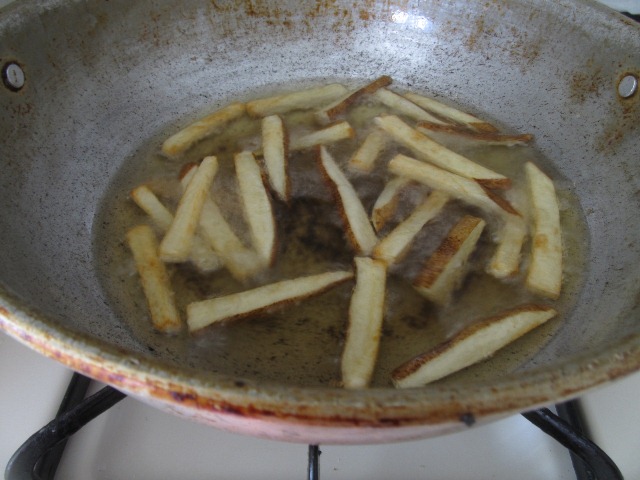 Step 12. Meanwhile arrange a tray with kitchen tissue. Once the potato slices are evenly colored, take them out and out them on the tray. Jeevs does not like them to be crispy. He wants the french fries to be only crunchy. If you want the french fries to be crispy and crunchy, you’ll need to wait until the potatoes turn nice golden brown while you are deep frying. Sprinkle salt and pepper and eat it hot. I actually sprinkle salt in the tissue paper before placing hot potatoes on them. This way I make the salt stick to the potatoes. Then I add the pepper. 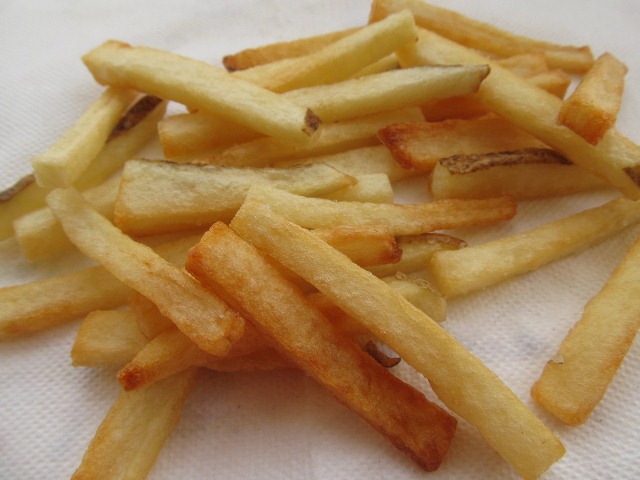 This event of making ultra-crunchy French fries by my aunt was nearly 19 years back! I have no idea how my aunt got the recipe for French Fries or imagined how to make the recipe that time. Hope my Aunt reads this post someday and goes back to her early 20s in memory. Thanks Athai!

When the bakery or the restaurant is just stone’s throw away from your house or office, why struggle so much to make this French fries instead of stopping by the restaurant and grabbing a packet of French fries? Do any of you sigh like this? Well, yeah right. But if that was the case I wouldn’t have even started writing a food blog. It’s becoming my passion to surprise and excite my readers. Other two good reasons why you would want to try them at home: We will know what oil is being used to fry the finger chips and we will know if the hands were really clean while handling the French fries :). 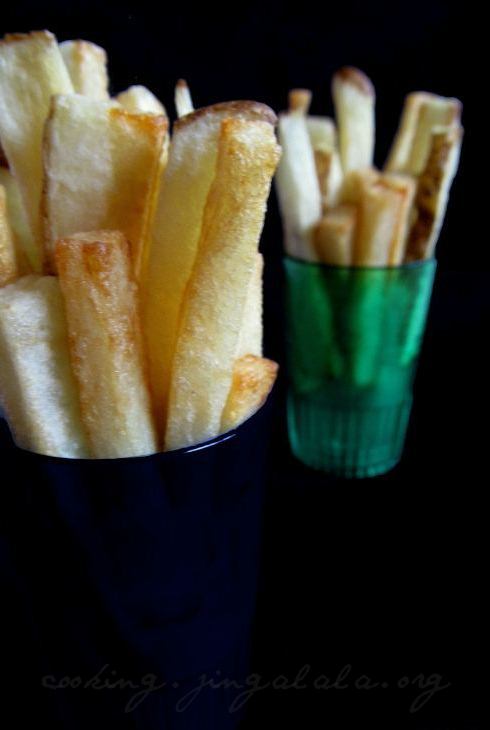 I made this recipe when Su, Ha, Ar, Jeevs and I played cards until 2 am few months back. I think everybody liked the Finger Chips! Try this recipe for making French fries/Finger Chips. Before I stuff in all the French fries for myself, I’ll hide some from my sight for Jeevs for his evening snacks.

Welcome to my other publishing channels

Thank you for visiting friend! I wish I can offer you a hot cup of ginger-tea for your visit, but here you have more than that! Scroll down and up, navigate to pages, explore and learn on the recipes: the origin of the recipe, stories about them, and remarks on them. Kumon, Tweet on!